Having multiple hobbies doesn't scale well: once you're past two or three of them, you'll have to live with the fact that you can't possibly shower each one with equal amounts of love and attention. Either you rotate them constantly, or you maintain one or two core hobbies and dip into others when time allows. Reading has been my core hobby for quite a while, and even before I picked up writing, I found that I didn't have as much time for video games as I once did. Thus video games have been relegated to holidays and the odd weekend.

That is, until I discovered roguelikes fairly recently and found them a perfect fit for my schedule. Games don't tend to last long (they're meant to be difficult, but yeah, I suck), and their turn-based nature means I can step away at any time and return later to pick up exactly where I left off. Don't let the simple graphics fool you—roguelikes employ deliciously intricate mechanics and offer endless replayability. Did I mention that most roguelikes are free? If you're interested in the history of the genre, here is a wonderfully in-depth article to start with.

My first foray into the genre was Brogue. It's simple and short, and is an example of a coffeebreak roguelike, so named because they can be played in the span of one. Brogue is frequently recommended as a first roguelike for beginners because of its simple mechanics and clean interface, but I find it surprisingly tough1. Brogue is classless, meaning that you have to shape your play-style according to the items you find. It also has the most beautiful ASCII graphics I've seen that puts many tilesets to shame. There's a small but active community that participates in weekly "seed" challenges. 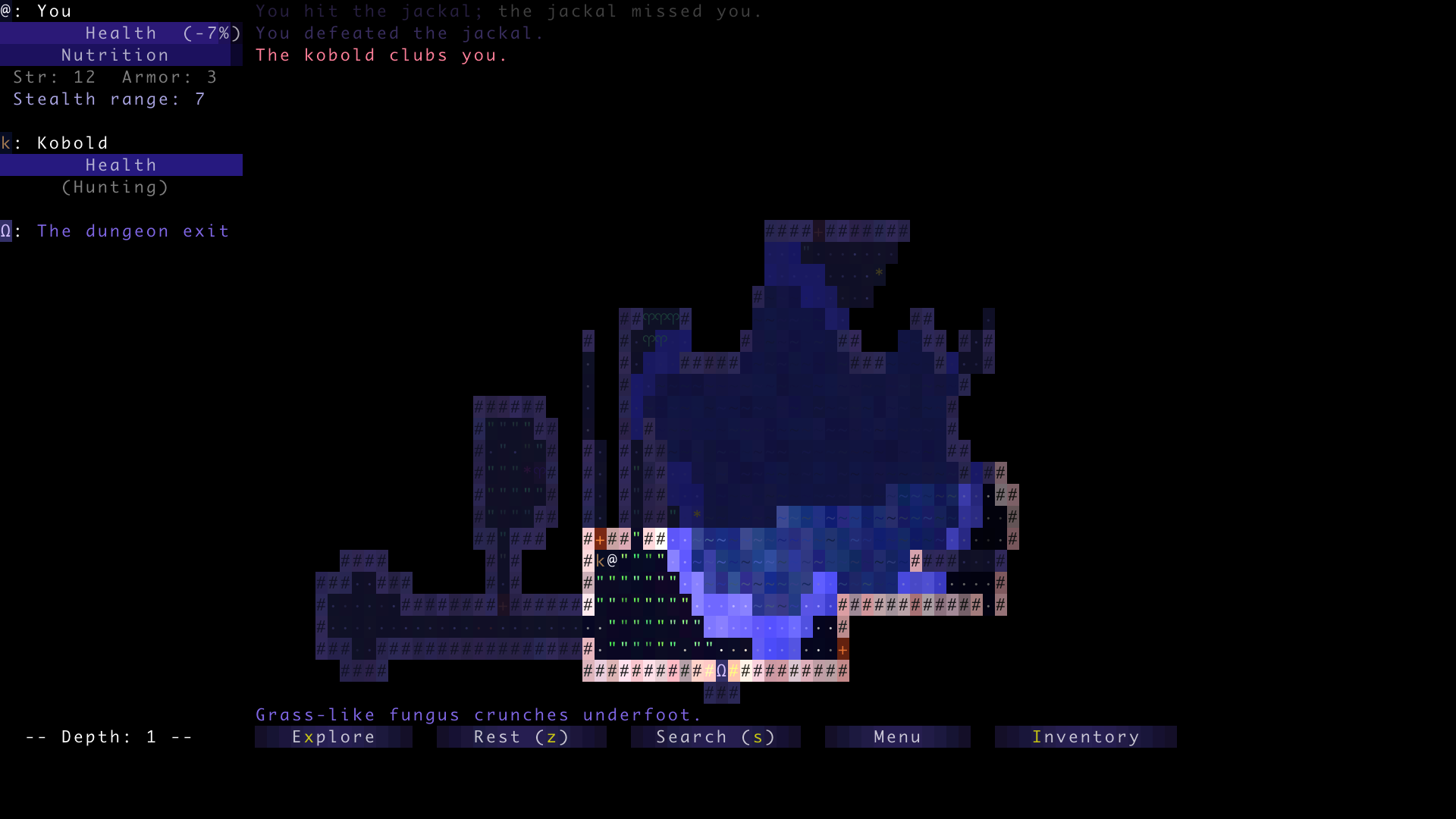 I hopped onto DoomRL—or DRL, as it was renamed in the wake of some dicey copyright trouble—after getting burned out on Brogue. It's inspired by Doom, of course, and it's every bit as awesome as that sounds. Complete with sound effects, this is a frantic and fast-paced shooter. The impressive variety of guns and relentless onslaught of abominations will keep you on your toes constantly. A perfect little adrenaline-delivery system, also playable within the confines of a coffee break. 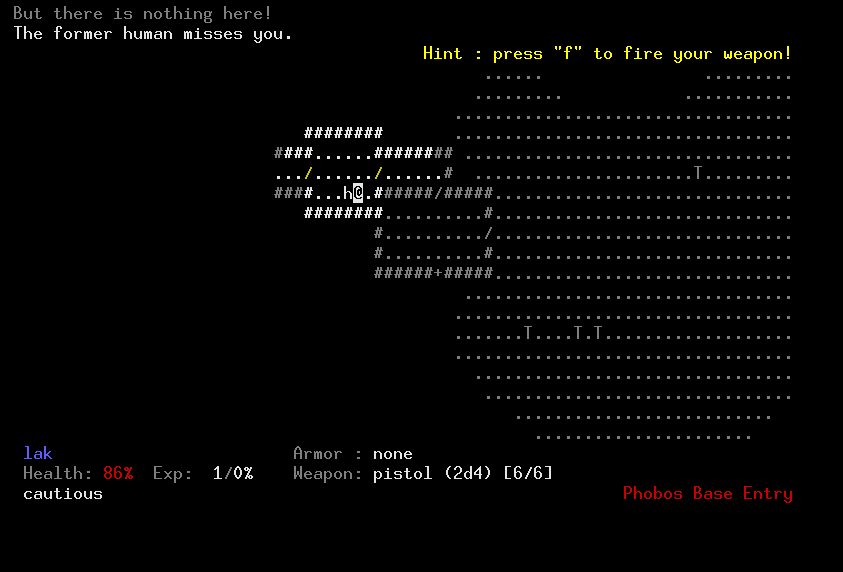 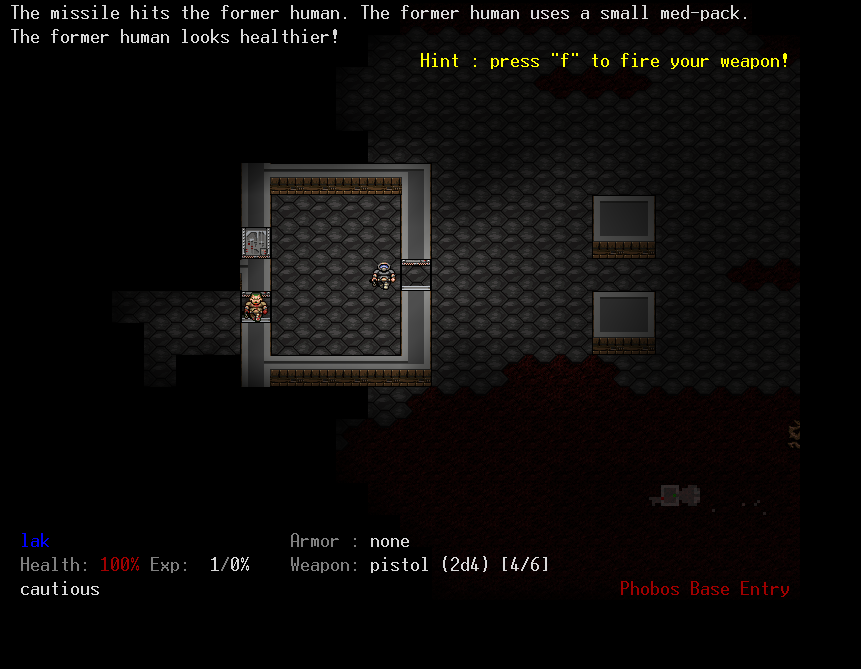 Cataclysm: Dark Days Ahead skews towards the Dwarf Fortress end of the spectrum of video games, minus the ridiculous FPS death. CDDA also has a much saner user interface. I stayed away from this one for a while because I'm not a fan of horror (CDDA is set in a zombie apocalypse), but I regret not jumping in earlier. Oddly, I find it calming instead of spooky, especially because there's a huge map to explore and so many things to do. It's a survival sim with remarkable depth, especially once you get to know the crafting system. There's no set goal except to survive, which takes more than a few frustrating tries to get to grips with. Each update adds even more features to a game that's already overflowing with them—in a good way! This is for you if you're looking for a kitchen-sink game, but found Dwarf Fortress overwhelming to the point of despair. If you need more convincing, head on over to Rock Paper Shotgun for some high praise. Check out the official forum and the subreddit for the essential tips and tricks that will help you survive past the first day. 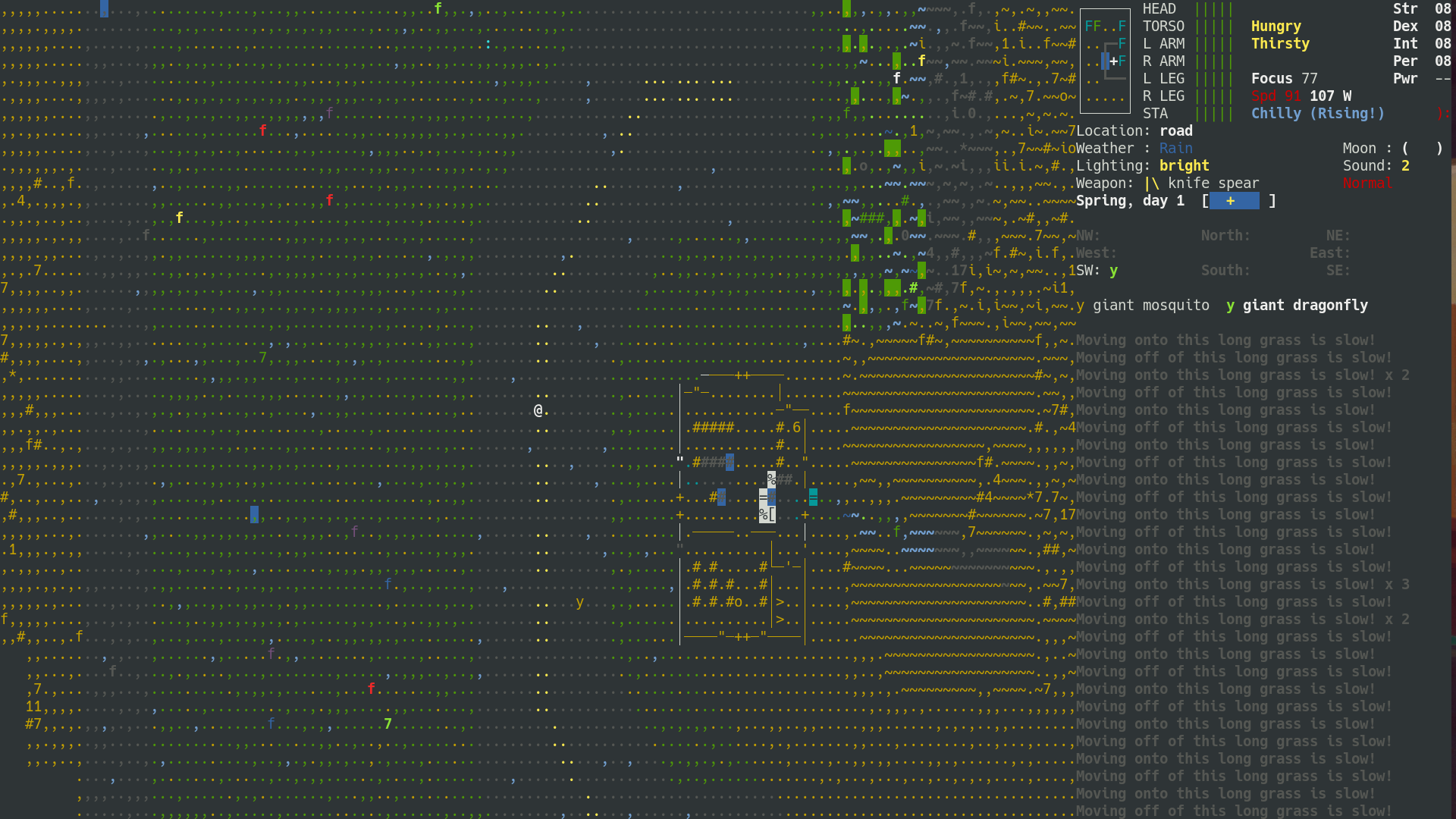 Tales of Maj'Eyal draws frequent comparisons to Diablo, and for good reason. It looks and plays very similarly to an aRPG, with its infinite loot system and ability cooldowns. The classes are myriad and the skill trees are overwhelming, with more branches than a simian Git developer could handle. ToME comes with enough lore to match any self-respecting cRPG, with frequent DLCs that add some pretty interesting content. Interestingly, it started off as a variant of Angband, a seminal entry in the history of roguelikes. As much as I was intrigued, though, this felt like a big time investment with a steeper learning curve than I could deal with. I'll have to give it another shot at some point. 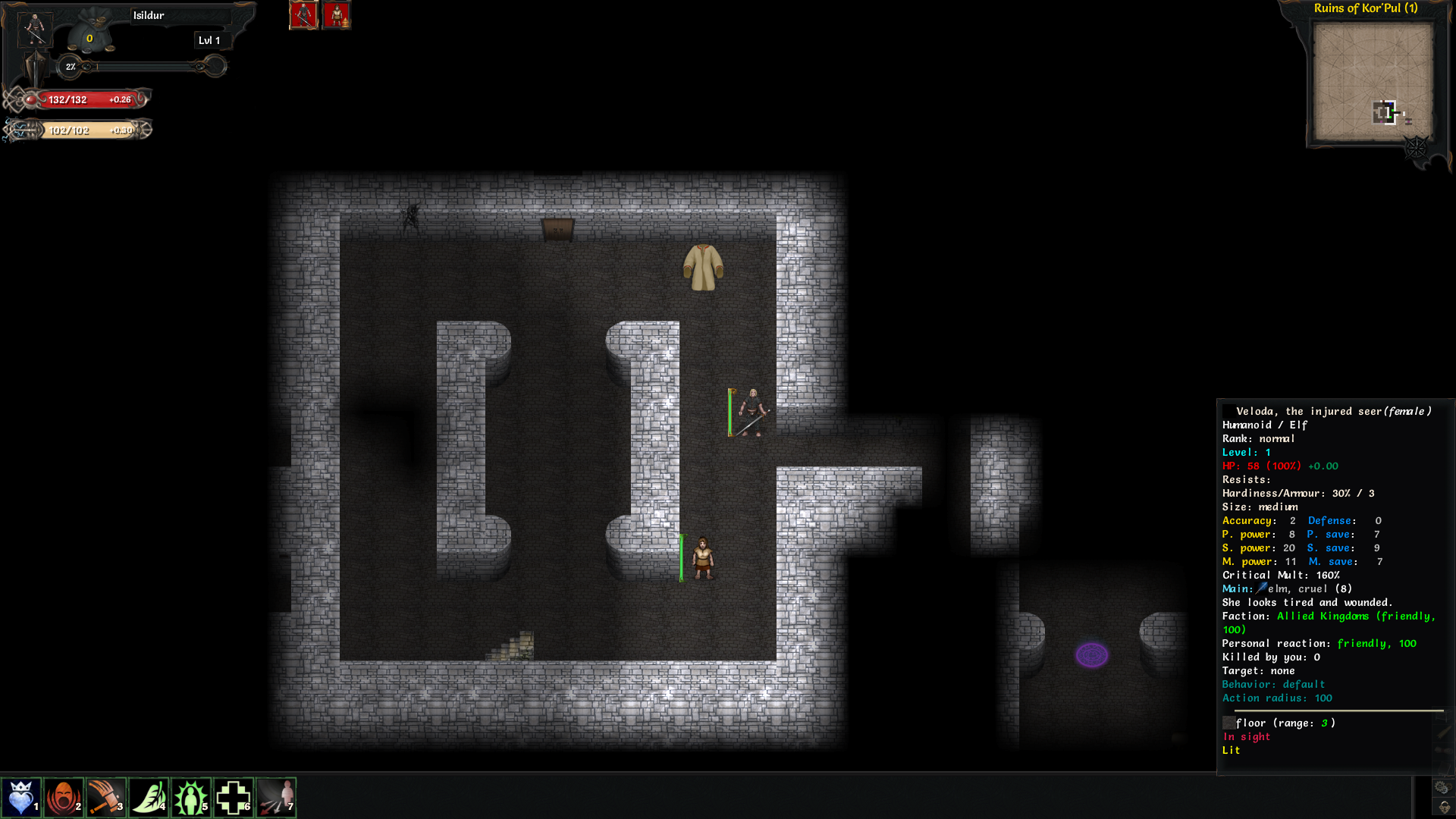 Last, but far from least, is Dungeon Crawl Stone Soup. This one has retained my attention the longest, and something about its charm just clicks with me. DCSS is a more traditional, well, dungeon crawler, with a nice range of species and classes to choose from. There's also a deity system that grants your character some interesting abilities, adding an interesting dimension to gameplay. It's very beginner-friendly, with sensible default key bindings and an actually useful tutorial. The community is relatively large and friendly, which you can check out at this forum or the subreddit. There are many wikis and tutorials that make learning to play a real joy, and frequent online tournaments that keep the community active. You don't have to download DCSS if you don't want to, as there are online servers that allow you to play from your web browser. DCSS is also a fascinating example of open-source game development, at one time having more than 200 developers working on it. Each update aims to streamline the game alongside new introductions and remove the extraneous bloat that characterises other famous roguelikes such as NetHack and Angband, and bar a vocal minority seems to keep its passionate community happy. In any case, there are many interesting DCSS variants that have spawned following controversial updates. 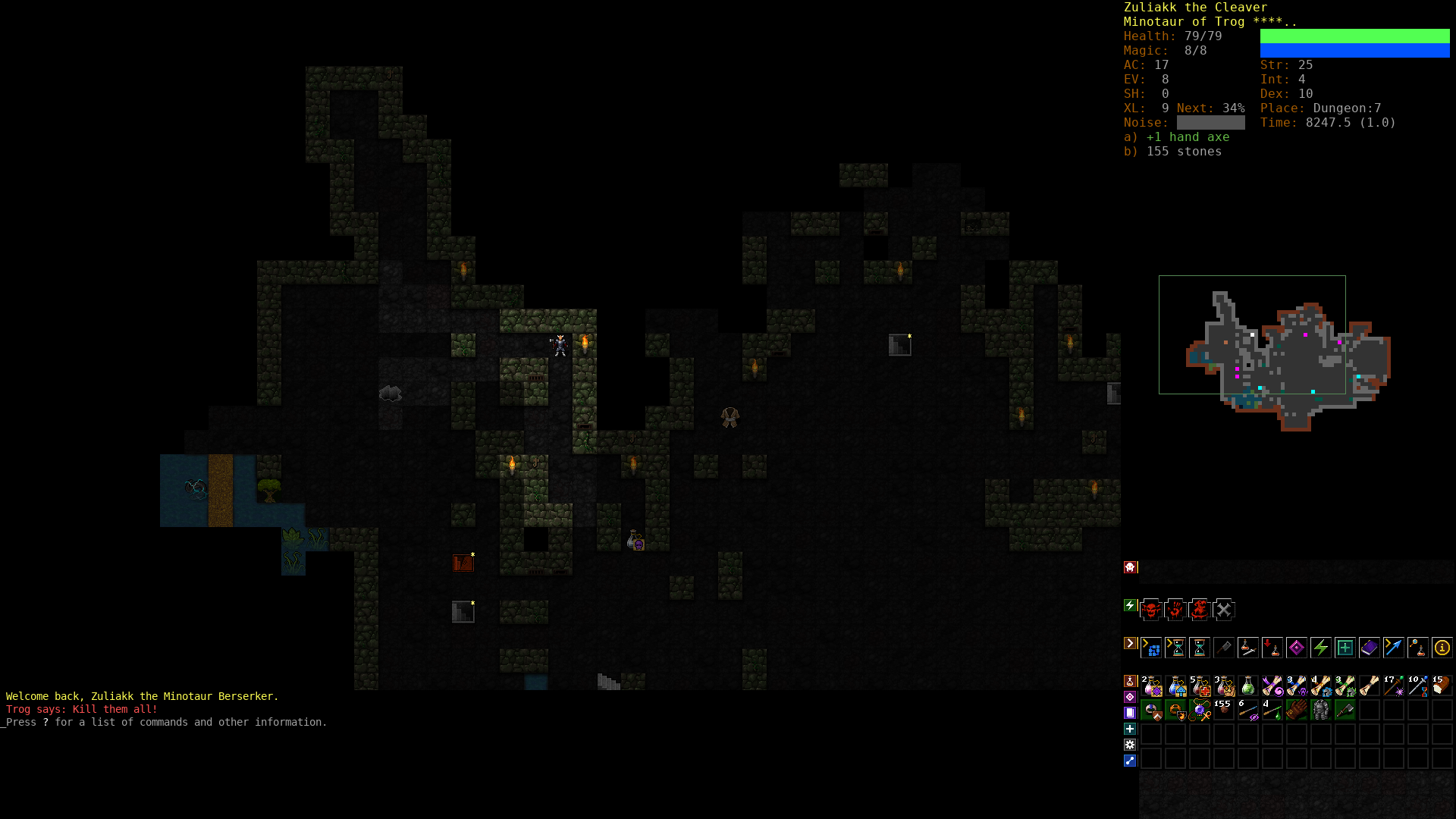 All of these games are available on most platforms (did I mention they are free?) including mobile, with the exception of ToME. As with any other game genre, the community is a big part of the appeal. Whether you want to dive right into roguelikes, or just lurk in the discussions for a bit, I suggest heading over to the r/roguelikes subreddit. RogueBasin is the wiki to check out.

Note: This website was absolutely free of images before today, and now I've included five in a single post. Not using images goes against every mainstream blogging convention, but I kinda liked the spare and minimalist look I had going on. Now I feel like I've broken not one, but five curses. One thing I refuse to compromise on is keeping my site GIF-free unless absolutely necessary, especially for my book reviews, because I hate this.

1 Refer to the comment above with respect to me sucking. ↩